On 12th April 2022, representatives of EU Member states, certain EFTA countries, the European institutions (EC, COR, EESC, ECTP-CEU), of the OECD and several local and regional associations (CEMR, CPMR etc.) took part in the virtual meeting of the Network of Territorial Cohesion Contact Points (NTCCP) which was held on 12th April 2022 to prepare the meeting of Directors-General of territorial cohesion (DGCOTER) which will take place on 24th June 2022 in Paris.

Building on the work carried out by prior Presidencies, the discussion at the NTCCP meeting focused on the communication and implementation of the Territorial Agenda 2030 with:

The overall French Presidency policy focus is to take time to reflect and look forward inviting to a reflection on what the evidence provided can tell us about the foreseeable territorial implications of long term trends and transition challenges in order for us to be better prepared for building a more just and greener Europe in a global ever-changing world.

An initial exchange of view took place following the presentation of two complementary policy documents used as read threads throughout all formal and informal discussions conducted under the auspices of the French Presidency on cohesion policy and on territorial and urban cohesion:

The first one is a paper made by the OECD for the French Presidency on the territorial implications of economic inequalities and of mega trends (English version here) to put European concerns into perspective and the Commission’s 8th Cohesion report providing several angles to approach the varied situations of our territories.

An exchange of view also took place on the possible implications of the Ukraine crisis for territorial management and spatial planning over the short and long term (e.g. integration of refugees, energy production etc.) and the need for further territorial evidence in the light of the ambitions contained in Territorial Agenda 2030. In view of the territorial dimension of the Ukraine crises, scenarios simulating the impact of the crisis will be produced shortly. 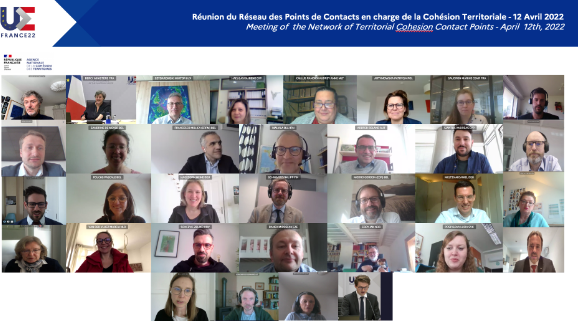