To support the elaboration of the Territorial Agenda 2030, the Finnish Presidency of the Council of the EU prepared and carried out an online survey which was sent out to authorities and decision makers from all administrative levels, from local to EU, and other relevant stakeholders, e.g. universities and associations. The survey was open from mid-December 2019 until the end of January 2020. Almost 300 responses from across the EU, Switzerland and Norway were submitted.

Overall, the survey responses confirm the importance of the priorities of the Territorial Agenda 2030. Indeed, all priorities of the Territorial Agenda 2030 were well-supported by the respondents. The priorities of a Balanced Europe, Functional Regions and a Healthy Environment are considered of particular relevance by the survey respondents. These are also the fields, in which the respondents see the most need for innovative and inspiring policy approaches. In addition, new initiatives related to Circular Economies are of particular interest. This emphasises the need to address a key question to be addressed by many involved in spatial development and spatial planning: How to bring together ecological, economic and social concerns? Place-based approaches and policy making can be a means in this regard and help to strengthen the territorial dimension.

For achieving the objectives and priorities of the Territorial Agenda 2030, the survey respondents underline the need for more cooperation between sectors, administrative levels and territories, as well as the need for more approaches related to capacity building, networking and sharing good practices (see figure below). In addition, sufficient funding is a necessary precondition to prepare and implement activities. This assessment of the respondents is fully in line with the rationale of the pilot actions which are currently under development and will be launched in December 2020. Their objective is to put the Territorial Agenda 2030 into practice and showcase ways to test and develop, at different administrative levels and with varying foci, innovative and inspiring approaches that contribute to achieving the priorities and objectives of the Territorial Agenda 2030. Cooperation across levels, sectors and territories as well as capacity building and European networking will be important elements of the pilot actions.

Furthermore, the survey reveals the respondents’ view on existing constraints and obstacles in the implementation of the previous Territorial Agendas, i.e. why has not more happened yet? The respondents see a lack of political willingness and ownership at various administrative levels, a lack of recognition of territorial and place-based approaches in policy making (both in sector policies and in EU Cohesion Policy) and a lack of awareness and knowledge of the existence of the Territorial Agenda in EU policies as well as in spatial planning. Communication activities, involvement of local and regional authorities and better integration with other policies can be steps in the right direction that are also emphasised in the current draft of the Territorial Agenda 2030. The first round of pilot actions, ongoing exchange with EU institutions and bodies, and national and European associations representing local and regional governments, as well as communication, coordination and monitoring activities will support a more strategic implementation process from local to EU level.

The detailed survey results will be taken on board for the next draft of the Territorial Agenda 2030 which will be discussed under Croatian Presidency at the meeting of the Directors-General responsible for Territorial Cohesion in Zagreb in April 2020. 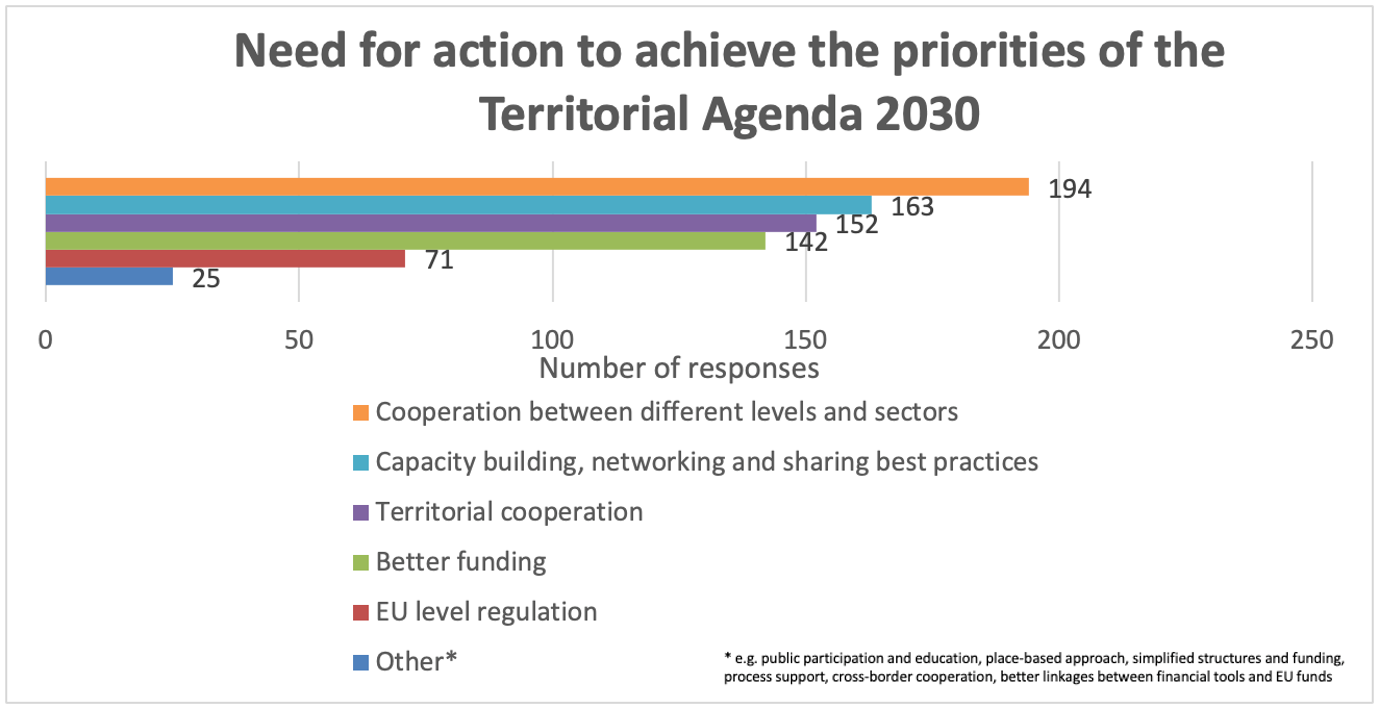