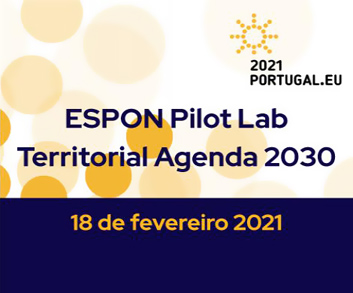 On February 18, the Portuguese Presidency of the Council of the European Union boosts a virtual joint session of reflection and debate dedicated to the sharing of experiences and discussion on the state of play and next steps of the Territorial Agenda 2030 pilot actions.

Promoted by the Directorate-General for Territory in collaboration with the ESPON EGTC, this live virtual laboratory is restricted to the Member States most directly involved in these pilot actions and to other relevant partners and observers, such as the European Commission.

The meeting will focus on the current status and predictable developments of the partnerships, giving each of the six pilot actions underway the opportunity to share their experiences and challenges and to balance with ESPON their needs for territorial evidence and knowledge, both in the short term (2021/22) and in a long term perspective within the framework of the European Territorial Cooperation Programme ESPON 2030.

Pilot actions will gain momentum during the Portuguese Presidency, welcoming integrated approaches and sharing innovative best practices for the dissemination and advancement of the renewed Territorial Agenda, a political commitment oriented towards action to promote territorial cohesion and guarantee a sustainable future for all the places and citizens in Europe.